America’s top NFL video game is set to release its 25th edition on August 31st, but that hasn’t stopped us from finding out team ratings before the game actually releases. For time’s sake, I will be discussing where EA went right and wrong with its team rankings as compared to player rankings.
EA correctly rated the best team in the league as the they scored the Philadelphia Eagles a 90 overall. Absolutely nothing wrong with this. The Eagles are the reigning champions and managed to improve their roster by adding Michael Bennett, who starts this season out with a player rating of 86.
The problem arises when we want to say the top team is six points ahead of the next best (Patriots). The second best team on the game is an 84!
Let’s compare these to Madden 18. In last year’s game, the top team was only two points better than the second overall team. The Patriots were rated a 93 while the Falcons were ranked a 91.
In no way do I think the Eagles are way out ahead of every other team in the league, but I do agree with them having the top spot.
Secondly, the second best team is only an 84? In Madden 18, there were 11 teams that had a rating of 84 or higher.
While I’m not going to get nit picky on small adjustments that could be made, like how one team should be a point higher than another team, because a lot of this is opinionated. However, I will acknowledge the huge mistake made in how the Rams are only an 80 and ranked the 11th best team.
The team finished 11-5 last season and won the NFC West. They’re led by some young guys on the team such as Goff and Gurley, who you would think could only improve. Gurley has proved to be one of the top backs in the league. The team also added Aqib Talib, Marcus Peters, Ndamukong Suh, and Brandin Cooks. I believe the Rams will be a title contender this upcoming season, and they deserve to be rated higher than an 80.
There aren’t many teams I can say that EA rated too high. Maybe the Raiders. They were a huge letdown last year after many believed they would win the AFC West, but were only able to pull out six wins. Their key additions to the roster this season are Jordy Nelson and Marcus Gilchrist. 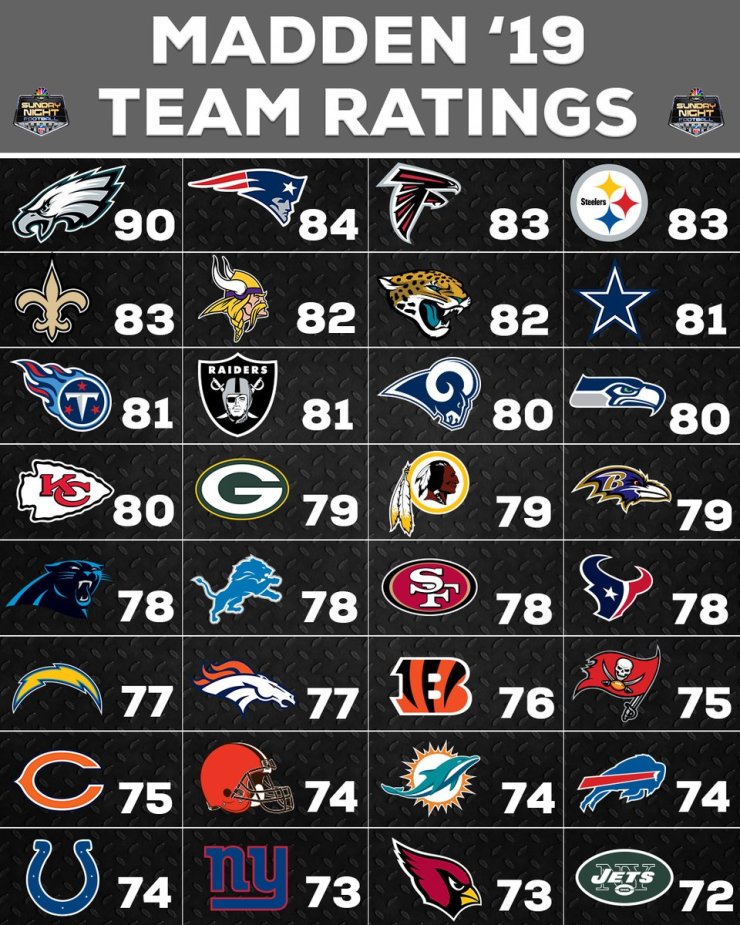 I don’t think the ratings were absolutely terrible this season but I don’t know what the makers were thinking when they thought rating the Eagles way out in front of everyone else was a good idea. There happens to be good news for those who can connect online: EA Sports will be able to update rosters and rankings during the season to stay accurate. So initial ratings aren’t too big of a problem as long as they can make adjustments during the season.